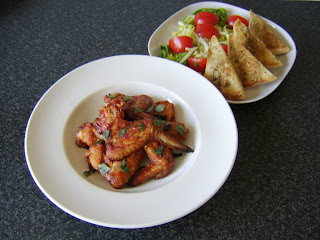 Feeling the summer heat? Are hot and spicy chicken wings

the last thing on your mind right now? Maybe these chicken wings, still hot and spicy but served cold with a simple summer salad and some easy made Italian bruschetta would be just what the doctor ordered for dinner tonight. They are perfect for eating outside, served with a freezing cold beer. 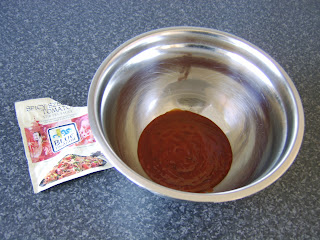 These wings can equally well be served hot but if serving them cold as I have done, you will have to cook them at least a couple of hours in advance. The sauce which I have used is simply a 4oz pack of stir fry sauce

but you can use sauce from a larger jar. This will be perfect for a pound, to a pound and a quarter, of chicken wings.

Put the sauce in to a large bowl and add the chicken wings. Stir carefully and well. If time permits, cover and refrigerate for an hour or so to marinate. 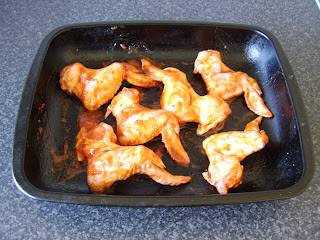 Preheat your oven to 400F/200C. Spread the wings out in a single layer on a large baking sheet or roasting tin. Cook for thirty-five minutes. Remove the tray from the oven, cover with foil and set aside to rest and cool.

Ingredients per Person for Salad and Bruschetta 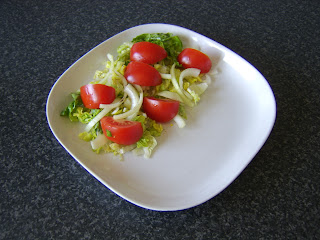 Wash the lettuce and roughly chop. Finely slice the onion and cut the tomato in to six segments. Season with salt and pepper, mix carefully together and arrange on a serving plate.

As the bruschetta is going to be served hot, we want everything else ready to serve before we prepare it. Lay your chicken wings therefore on a separate plate and scatter with some freshly torn basil leaves to garnish. 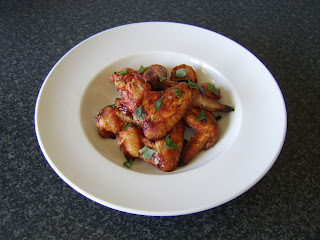 The Ciabatta roll should be halved horizontally. Preheat an overhead grill and toast the halves of the roll on both sides until beautifully golden. Lay them cut side up on a chopping board. 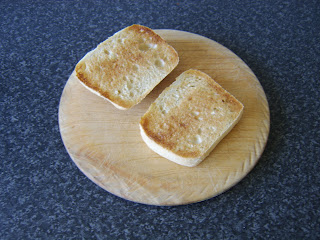 Peel the garlic clove and lightly crush it under the blade of a large knife. This simply helps to release the juices and impart the flavour in to the toast. Rub the garlic clove over both slices of toast and discard.

Drizzle a little extra virgin olive oil over the toast, season with salt and black pepper, arrange by the salad as shown and serve immediately. 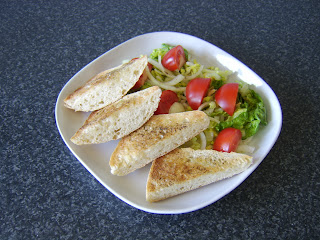 If you are looking for more original ideas for serving chicken wings, hot or cold, you may find the site linked to below to be of interest: 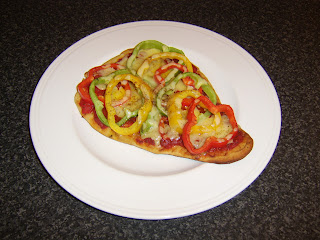 is probably one of the food types most suited to vegetarians. Lush tomato sauce, on freshly made bread, topped with fresh Mediterranean vegetables and cheese. This recipe is very much along those lines but in order to provide a little bit of variety, the base of the pizza is an Indian naan bread, rather than the traditional Italian type made in a pizza pan 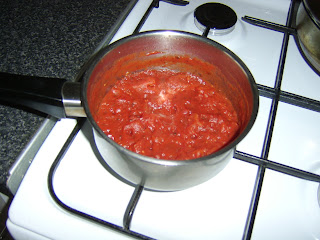 The first step is to make the tomato sauce for the pizza, as it will require to be cooled before it is spread on the pizza. Pour the tomatoes in to a saucepan. Peel and grate the garlic clove in to the pan and season with salt, black pepper and the dried basil. Heat until the mixture reaches a simmer and turn down the heat to minimum. Simmer gently for fifteen to twenty minutes, stirring frequently until a smooth, velvety sauce is formed. Cover and allow to cool completely. 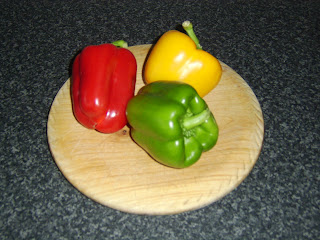 This recipe uses one red pepper, one green and one yellow, simply to afford the finished dish some colour. Any combination of peppers can, however, be used. Top and tail the peppers, de-seed and slice to a thickness of around a quarter of an inch. 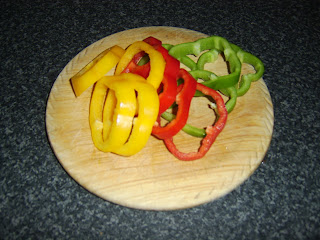 Put your oven on to preheat to 450F/220C/Gas mark 8. Lay the naan bread on a large baking tray and spread the cooled tomato sauce evenly over the top, leaving a narrow border around the edge, both to prevent spillage and to allow a crust to form. 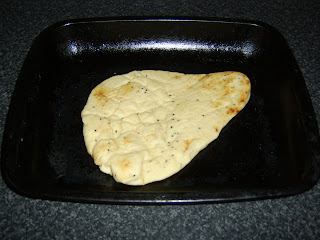 Lay the slices of pepper alternately on the naan bread and sauce as shown. Do not add too many slices, even if it means having some left over, as this would affect how evenly the naan pizza cooks. 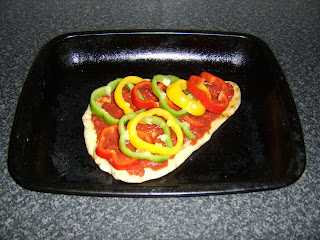 The cheese should be grated and spread evenly over the top of the bell peppers. Season with plenty of freshly ground black pepper and place in to the oven for ten minutes. 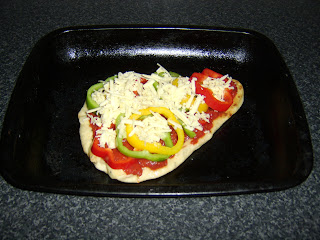 When the pizza is ready, transfer it to a plate and scatter over the fresh rocket/arugula or fresh herb of choice, if desired. Serve immediately.

If you want more topping ideas for naan bread pizzas - of the non-vegetarian variety - take a look at the site linked to below:

How to Make Naan Bread Pizza 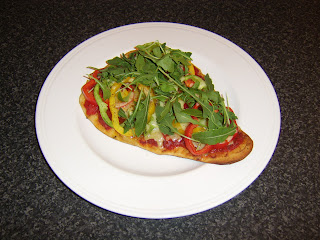 Posted by Gordon Hamilton at 09:02 0 comments