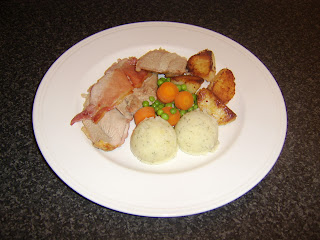 Although a sizeable majority outwith the United States won't be aware of it, next Thursday (25th) is the day when the people of the USA celebrate Thanksgiving. One of the biggest culinary traditions associated with Thanksgiving in the USA is the roast turkey, which family and friends sit down to enjoy together. While this is all very well for those in the majority who have the family and friends with whom to share this traditional feast, what about those who are going to be alone on Thanksgiving, or perhaps simply part of a couple? A whole turkey is hardly likely to be feasible, so people who find themselves in this situation may miss out by having to settle for a more run of the mill Thanksgiving dinner. Fortunately, as we are about to see, that definitely does not have to be the case... 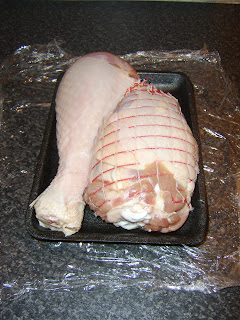 Turkey is often perceived as being a dish served only on special occasions. Be it Thanksgiving in the USA, or Christmas here in the UK and in many other countries, people naturally associate turkey meals with those days and think only in terms of a whole turkey, roasted in the oven and served with all the traditional trimmings. The reality is that turkey is every bit as versatile as chicken and can be cooked, prepared and served in any number of ways. This means that supermarkets sell not only whole turkeys but pieces of turkey, diced turkey breast and even minced/ground turkey. If you are looking for a traditional roast turkey Thanksgiving dinner for one this year, see what your local supermarket can offer in this respect. I bought the above whole turkey leg today at my local supermarket for £3.99 (around $6). The drumstick is carefully tucked away in my deep freeze, while I prepared the thigh as I am about to demonstrate. 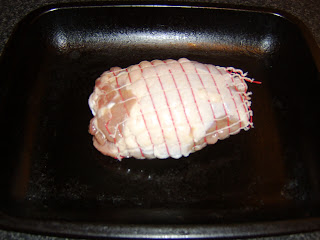 This is as simple a way of roasting turkey as it gets. The turkey thigh is sat on a roasting tray - with nothing added. The tray is then placed in to the oven, preheated to 400F/200C/Gas Mark 6. When the turkey is in the oven, peel and quarter the medium potato and put it in to a pot of cold, slightly salted water. Put the pot on a high heat until the water boils, then reduce the heat and allow it to simmer for ten minutes only. Drain the water and refill the pot with cold water, in which the potato should be left to cool for about ten minutes. After this time, drain the water away and cover the pot. 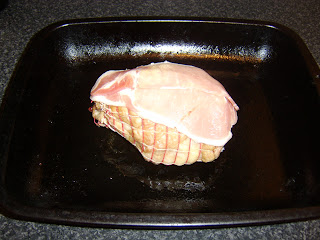 When the turkey has been in the oven for half an hour, take it out and cover it with two rashers of bacon. Most people use streaky bacon at this stage but I prefer to use ordinary bacon, as I find streaky bacon can be too greasy. By all means, however, use perhaps four rashers of streaky bacon if you prefer. 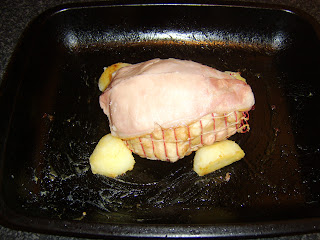 After a further half hour, the cooled potato pieces should be added to the roasting tray for what will be the final half hour of cooking the turkey. Shake the potatoes around in the pot to fluff the surface up a little before adding them to the tray and carefully turning them around in the cooking juices with a spoon.

When the turkey has fifteen minutes of cooking time remaining, the large potato should be peeled, chopped and added to a pot of cold, slightly salted water. The water should be brought to a boil, before being reduced to a simmer for twenty minutes. 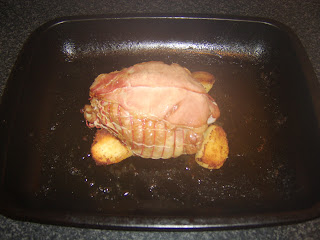 It is imperative that the turkey be allowed to rest when it is removed from the oven. Ten to fifteen minutes will be sufficient for this piece of meat. Cover the tray with some aluminium foil to form a seal and leave it while the potatoes which will be mashed complete cooking and you cook the carrot and peas.

The carrot should be washed and sliced in to discs. It should be added to boiling water for ten minutes, with the frozen peas added to the same pot for the final three minutes of the cooking time.

When the potatoes are ready, they should be drained and mashed with the dried dill and a little butter. The carrots and peas should then be drained, the turkey carved and the meal plated up and served.

Note that this sized piece of turkey will easily provide for two but equally, the excess can be refrigerated and enjoyed on sandwiches for lunch the following day. Although gravy is popular with a meal such as this, I prefer not to serve it, as if the turkey is prepared as described, it will be so tender and moist that gravy would simply mask and detract from its delicious, natural flavours.

The link below affords lots more ideas for turkey recipes for Thanksgiving, either for one person or where the family may fancy a slight change from the absolutely traditional.

Whatever you are doing this Thanksgiving, I hope that you have a wonderful time and thoroughly enjoy your turkey, however it may be prepared and served.
Posted by Gordon Hamilton at 12:42