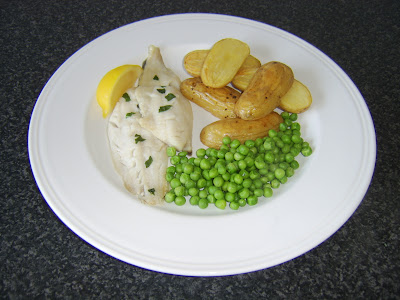 There will unquestionably be a great many people reading this and thinking, "What is pouting?" Pouting - Trisopterus luscus - is actually a type of fish, a lesser known member of the cod family and one that is not generally considered good to eat. It is usually only caught by mistake by rod and line anglers when fishing for other species and either thrown back in to the sea or used as bait in the hope of a more desireable, alternative catch. I have to be honest in that I too subscribed to this belief until very recently, when I happened to be engaged in my frequent practise of browsing the fresh fish offerings in my local supermarket. When I saw, "Pouting fillets," my initial reaction was that it was some form of joke. Soon realising it was no joke, however, I decided to purchase some and have a first ever go at cooking pouting 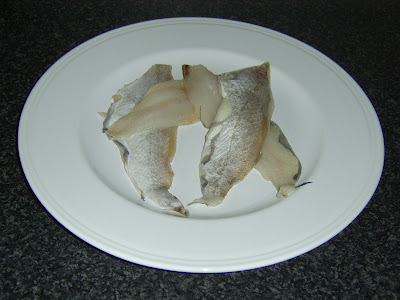 The first big positive of buying and cooking pouting for anyone who is perhaps on a restricted cooking budget is that they are incredibly cheap. The four fillets pictured above cost me only just over £1.00 and are easily sufficient to serve two people. The reason for this is unquestionably due to their lack of popularity and - as I hope to show - is in no way indicative of poor flavour.

Although I knew that pouting were a member of the cod family and that most cooking methods which could be applied to such as cod, haddock or whiting would most likely work perfectly well, I decided to take a quick look at Google for some potential inspiration. I was amazed by the lack of pouting recipes to be found in this normal goldmine of information and although I did find a few appealing suggestions, I decided to go it alone, cook pouting as I would whiting and hope for an at least acceptable result. 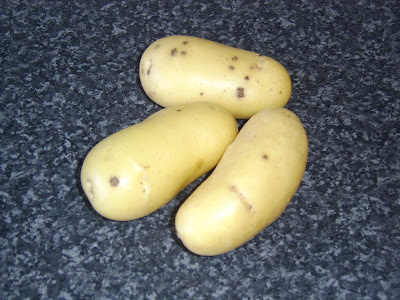 . The potatoes I am using here (pictured above) were given to me from a local garden. They are very floury and thus perfect for roasting. Given their long, oval shape, I simply scrubbed them and cut them in half lengthwise.

It is imperative that the potatoes be put in to hot and never cold oil. I therefore added sunflower oil to a deep baking tray (enough to comfortably cover the base) and put it in to the oven, which I turned on to preheat to 400F/200C/Gas Mark 6. 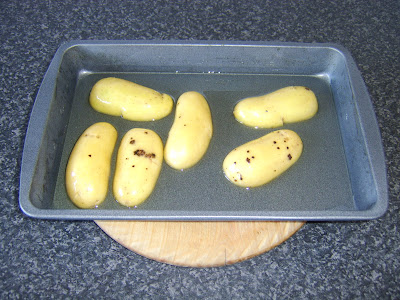 After fifteen minutes, I removed the baking tray from the oven and added the halved potatoes, skin side down. I gently swirled them around to coat them as much as possible in the oil before using cooking tongs to turn them so that they were flesh side down. I then put them in the oven for twenty minutes, at which point I carefully turned them over to expose the flesh side and cooked them for a further twenty minutes. 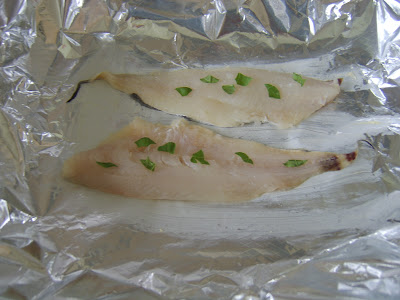 The aluminium foil should then be folded in to form a sealed tent. There should be plenty airspace in the package to allow the steam to cook the pouting fillets. The tray should then be placed in to the oven for eight to ten minutes, dependant upon the size of the pouting fillets. This should of course be done to make the end of the cooking time coincide with that of the potatoes.

The peas which I have served with this dish were frozen. This means that they required to be added to boiling water for a mere three minutes. I put them in to the water immediately before I removed the pouting and potatoes from the oven to begin plating up. A wedge of fresh lemon also makes an optional but attractive garnish.

This is now the third time I have cooked pouting and I have every intention of doing so again. You can find my other pouting recipes (totally different to this one) via the link below:

How to Cook Pouting 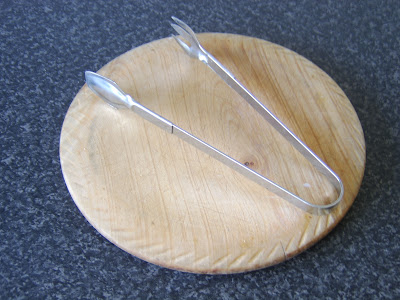 I mentioned in this recipe that I use cooking tongs (pictured above) to turn potatoes in hot oil and for a whole host of other purposes in the kitchen. These incredibly versatile implements should be a must have for any kitchen. They not only make many jobs easier but considerably safer by reducing the risk of dropping hot food or causing oil to splash up, as would be the case with a spatula or spoon.

Below is an example of the bargain tongs currently available to buy from Amazon.com.

Posted by Gordon Hamilton at 06:50