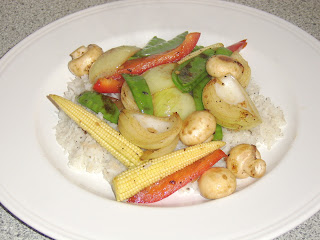 A vegetable stir fry is probably one of the easiest and quickest stir fries of all to prepare and as it has been some time since I have included a vegetarian option on this blog, I decided that this easy vegetable stir fry served with simple fried rice was one of the best ways to put that right.

Prepare the fried rice first as instructed via the link above and keep warm in a serving dish while you stir fry the vegetables.

Ensure that the seasoning is well mixed through the ingredients before turning off the heat and serving immediately on a bed of fried rice.

Alternatives to Soy for Vegetarians 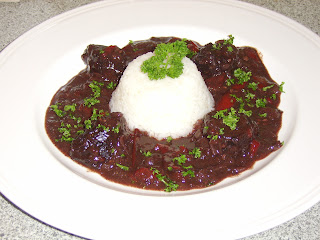 Put the sunflower oil in to a large pot and bring it up to a medium to high heat. Put the flour in to a bowl and season well with salt and freshly ground black pepper. Add the venison pieces and stir them around well in the seasoned flour. Shake the excess flour off each piece of venison and add them to the hot oil. Stir them around in the oil with a wooden spoon for a couple of minutes until they have completely browned and sealed. Add the onion, red pepper and garlic and stir in this way for another minute or so before adding the red wine and fresh beef stock. Bring to a boil, cover and simmer as gently as possible for at least two hours, until the venison is tender, stirring occasionally and well. Note that it is possible that a little more stock or wine will be required towards the end of the cooking time.

Around fifteen minutes before the venison is due to be ready, wash the rice thoroughly in running cold water through a sieve and add it to a pan of boiling, salted water. Cook for twelve minutes before draining well. Line a small ramekin with clingfilm that the film overhangs by at least an inch and pack the rice tightly inside, filled level with the top of the ramekin. Place the serving plate on top of the ramekin and carefully turn them over that the plate is now on the bottom. Gently hold the edges of the clingfilm and lift the ramekin away before carefully peeling the clingfilm away to leave the rice ready to serve as shown in the photograph.

Spoon the braised venison and red wine and red pepper reduction around the rice and garnish with the freshly chopped parsley.
Posted by Gordon Hamilton at 04:52 0 comments 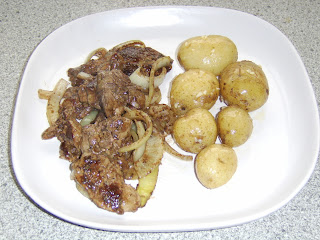 Chicken livers are probably not as popular as such as ox liver or lamb's liver. They are obviously considerably smaller in size and even more delicate in texture and in flavour, however they serve very well as the principal ingredient in many good recipes. This recipe for chicken liver and onions with new potatoes in garlic butter is not only delicious, it is incredibly simple to make.

Put the potatoes in to a pot, season with salt and cover with boiling water. Simmer for twenty-five to thirty-minutes.

Put the flour in to a bowl and season well with salt and freshly ground black pepper. Stir well. Just over ten minutes before the potatoes should be ready, put the sunlflower oil in to a large non-stick frying-pan and bring it up to a medium to high heat. Add the chicken livers to the bowl of flour and stir them around well to evenly coat them in flour. Pick the pieces out one by one, shake them free of excess flour and add them to the frying-pan.

Fry the livers for around three minutes each side before adding in the onions and sage and stirring well. Fry for another couple of minutes before adding the balsamic vinegar for the last two minutes of cooking time, continuing to stir frequently.

Drain the potatoes and return them to the empty pot. Add the butter and the garlic and swirl around well to ensure good and even coating.

Serve the livers and potatoes immediately.
Posted by Gordon Hamilton at 07:04 0 comments 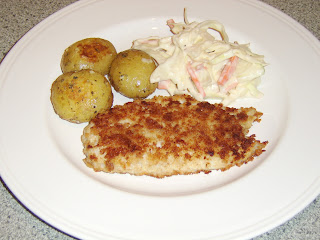 Whiting is one of my favourite types of fish. Its clean, fresh, delicate flavour is beyond the compare of many and provided it is not over-cooked it will provide for a delicious and healthy meal. When preparing any type of fish in breadcrumbs, however, many people make the mistake of using packaged breadcrumbs or fish dressing from supermarkets, when nothing can beat the fresh breadcrumbs simply prepared at home.

If using the larger new potatoes as I have done, they will require a total of forty minutes' cooking time. Smaller new potatoes will require only thirty minutes. In either case, they should first be boiled - unpeeled - for half the alloted time in salted water prior to being very well drained. One tablespoon of sunflower oil should then be added to a large bowl along with the sage and some more salt. This mixture should be stirred, prior to adding the potatoes and carefully stirring them around to coat them all in the seasoned oil. The potatoes should then be poured on to a pre-heated baking sheet and placed in the oven - pre-heated to 400F/200C/Gas Mark 6 - for the second half of their cooking time. The bowl should be left unwashed and set aside for later use.

When the potatoes are in the oven, a slice of semi-stale bread should be grated or shredded to make the breadcrumbs. If the bread is fresh, it should be sat on a vacant shelf in the oven for a minute or two to dry out a bit. The breadcrumbs should then be spread evenly on a dinner plate. The egg should be placed in a small soup plate or similar, seasoned with a little salt and beaten thoroughly.

Ten minutes before the potatoes are due to be ready, put the remaining tablespoon of sunflower oil in to a non-stick frying-pan and bring it up to a medium heat. Draw the whiting fillet through the egg-wash, ensuring all parts of the fillet are coated prior to patting it down in the breadcrumbs on both sides. The fillet should then be gently fried for about four minutes on each side.

Five minutes before the end of the scheduled cooking time for the potatoes, add the crushed garlic to the bowl used earlier. Remove the potatoes from the oven, tip them in to the bowl and stir them around in the oil residue and garlic. Return them to the baking sheet and the oven for the final five minutes.

The fish and the potatoes may then carefully be plated up and a spoonful of coleslaw added as a final accompaniment.
Posted by Gordon Hamilton at 05:32 0 comments