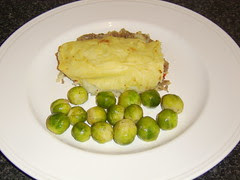 Cottage Pie in its most basic form is of course minced or ground beef, topped with mashed potato. Usually, however, there will be some vegetables added to the beef. Carrots, peas and onions are popular additions of this type. This Cottage Pie is a little bit more spicy, however, designed to provide a little more heat on a cold Winter's night and I hope that it is something which you will be prepared to try. This is a recipe for two people.

The beef should be browned in a dry, non-stick pan, before the carrots, onions, garlic, chilli and heated beef stock are added. The mix should be seasoned to taste with salt and freshly black pepper. It should then be simmered for half an hour.

When the beef is simmering, the potatoes should be peeled and chopped and added to a pot of salted, boiling water and simmered for twenty to twenty-five minutes until soft. They should then be drained and mashed with a little butter.

The beef, vegetables and remaining stock should then be placed in to a casserole dish. The potato should first be spooned evenly on top and then smoothed out carefully with a knife. The Cottage Pie should then be placed in to the oven - pre-heated to 400F/200C/Gas Mark 6 - for twenty-five to thirty minutes. It can be browned under the grill for a couple of minutes, prior to serving, if desired.

The small sprouts that I have used here should be simmered in salted water for around eight minutes. larger sprouts will take ten to twelve minutes. It is important not to overcook the sprouts, as this will cause them to turn mushy and most unappealing. They should then be drained and swirled in a little butter and the nutmeg before being served with a portion of Cottage Pie.

Posted by Gordon Hamilton at 04:23 0 comments 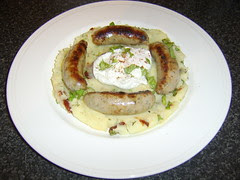 Sausage and mash? Have I lost all my inventiveness? Am I now resorting to including on this blog blase meals from my childhood?

Hopefully you will see from the photograph to the right alone that this recipe is not just for any old bangers and mash! This is a recipe incorporating high quality, high meat content pork and leek sausages, with mash which has more than just a little bit of a twist and a lightly poached egg just to round it off. I very much hope that you will try it out - or at least a similar version of it - for yourself.

The recipe described below is for one person.

There is often much argument surrounding how best to cook sausages. The way I do it is to cook them in a little oil in a frying-pan on as low a heat as is possible. This will prevent them from bursting as you should never prick sausages prior to cooking them. This serves only to allow the juices (thus the flavour and moisture) to escape and for the sausages to be served like something akin to hot, dry, tasteless sawdust in dried out, wrinkled skins.

The sausages should therefore be the first item to be put on to cook. When they are gently sizzling in the pan - to be turned occasionally - the potatoes may be peeled, chopped and added to a pan of boiling, salted water to simmer for around twenty-five minutes until moderately soft.

A large pan of water with a little white wine vinegar in it should then be brought to the boil for poaching the egg. When the water has reached a rolling boil, it should be stirred carefully but firmly to create a whirlpool effect, in to the centre of which the raw egg should be carefully deposited to cook, before the heat is reduced and the potatoes are drained and mashed. 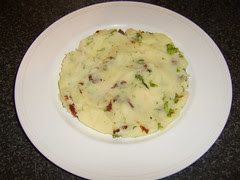 It is important to drain and mash the potatoes before adding any of the other ingredients, except perhaps a little butter. This prevents the other ingredients becoming entangled in the potato masher. The sun dried tomatoes which I used in this recipe came in a glass jar, preserved in olive oil. The tomatoes must be dried thoroughly in paper kitchen towel prior to being chopped and added to the potatoes or the olive oil will spoil the overall effect.

The garlic, coriander and sun dried tomatoes may then be stirred in to the mash, which should be arranged on a circular plate as shown in the picture to the left. The sausages and the egg should then be added on top, with the coriander and paprika garnish sprinkled on last of all.
Posted by Gordon Hamilton at 13:33 0 comments 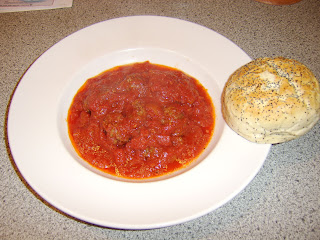 Although meatballs and tomato sauce are more popularly used to accompany a pasta such as spaghetti rather than served alone in this fashion, I decided one night recently to have them accompanied instead by a fresh, onion ciabatta roll. I was delighted with the results - and even found that I had sufficient tomato sauce left over to cool, refrigerate and re-heat to have with some pasta shells for the following day's lunch!

This recipe is for one person.

Put the beef, garlic and oregano in to a large bowl or basin and season with salt and freshly ground black pepper. Mix very thoroughly by hand before taking parts of the mixture to shape it in to meatballs, each about the size of a golfball. The quantities given here should make seven or eight meatballs. 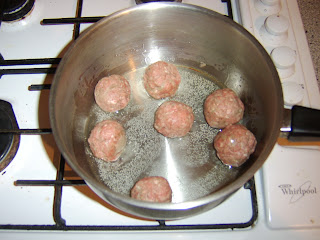 Add enough olive oil to a pot to cover the base of it and bring it up to a medium heat. Carefully place the meatballs in the pot and gently stir them around with a wooden spoon until they are browned, as shown in the photographs to the left. This process should take no longer than two to three minutes.

When the meatballs are evenly browned in this way, add the chopped tomatoes and turn the heat up until they begin to simmer. Reduce the heat to keep them at a gentle simmer and cook in this way for half an hour, stirring gently and occasionally.

The meatballs should then be added to a serving plate and the desired amount of tomato sauce spooned over the top. The onion ciabatta roll should be served on the side.

Remember to allow the remaining tomato sauce to cool before refrigerating and to use it up the following day. 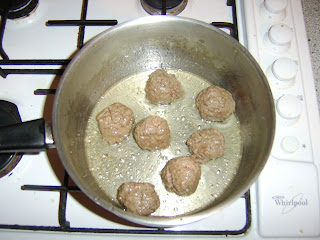 Meatballs with Tomato Sauce from the BBC

Pasta with Meatballs in Tomato Sauce

Meatballs with Tomato Sauce and Spaghetti

Organic Meatballs in Fennel and Tomato Sauce
Posted by Gordon Hamilton at 06:34 0 comments

Pork and Pineapple Stew with Garlic and Sage Roast Potatoes 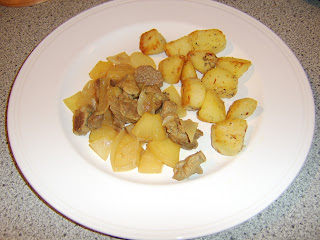 Pineapple is of course very popular served with gammon steak but the fact is that it goes equally well with pork. This simple, one pot stew is delicious and very warming on a cold Winter's night and should adequately serve two people.

Begin browning the pork in a dry pot over a gentle heat. You are only looking to seal the meat at this stage and constant stirring should prevent sticking. When the meat is browned, add the chicken stock, bring to a boil and simmer gently for half an hour.

When the pork has been simmering for about twenty-five minutes, put the chopped potatoes in to boiling, salted water and reduce to a gentle simmer. Put a deep baking tray - the base liberally covered with corn oil - in to the oven and the oven on to preheat to 400F/200C/Gas Mark 6. Add the pineapple and onion to the pork and bring back to a simmer.

After fifteen minutes, the oven should be heated. Remove the potatoes from the heat and drain them well. Return them to the empty pot and shake the pot carefully to fluff up the outsides. This will help them to crisp up in the oven. Add them to the hot tray and again shake carefully to ensure even coating in the corn oil.

Lamb Steak and Kidney Pie with Savoy Cabbage and Onion 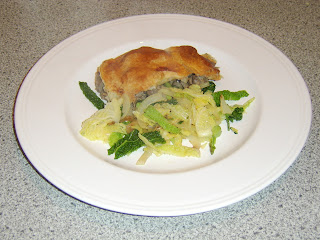 The following recipe is designed for two people:

The lamb steak and kidney should be rapidly browned in a large, dry pot and the heated stock added once this has been achieved. The stock should be brought back to the boil and then the heat turned down until a gentle simmer is achieved, for around half an hour. The meat can thereafter be used immediately to make the pie or allowed to cool.

The puff pastry should be rolled out to a sze where it is capable of covering a 10" by 5" ashet pie dish. The meat and stock should then be added to the dish, the edges lightly greased with a little butter and the pastry placed on top, firming it down around the greased rim. The top of the pie should be glazed with a little milk or egg wash and a "+" made in the centre to allow steam to escape during the cooking process.

The pie should be placed in the oven, pre-heated to 400F/200C/Gas Mark 6 for thirty minutes.

Approximately ten minutes before the pie is due to be ready, the sunflower oil should be added to a large pot and brought up to a medium heat. The cabbage, onion and garlic should then be added, stirred thoroughly and again at frequent intervals for ten minutes. Please note that no water or any other liquid is required.

This delicious meal is then ready to be served. 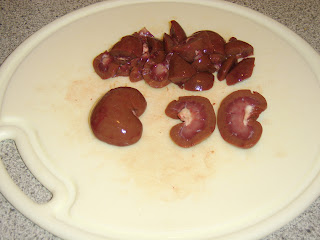 How to Clean and Prepare Kidneys

The easiest option is of course to have your butcher clean and prepare the kidneys for you, or to simply buy them pre-packed in this way from the supermarket. It is not difficult, however, to clean and prepare kidneys, provided one knows what to do.

The first step is simply to cut each kidney in half, down through the centre length-wise. It will then be possible to clearly see the white, fatty substance in the centre of the kidney which should carefully be cut out and discarded. The remaining meat can then be chopped to size as desired.