When I decided over the weekend to have a gammon steak one night, I only briefly had to consider what I would like to accompany it. I had been working on my website detailing healthy baked potato recipes, so a baked potato it would be. As I was buying pineapple anyway to accompany the gammon steak, the rest - as they say - is history. 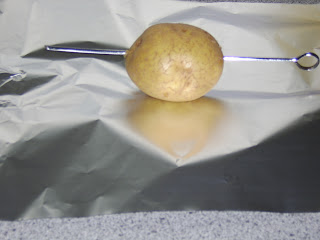 As a great many will know from bitter experience, one of the frequent drawbacks when baking a potato is that either the core remains hard when the remainder is ready or the skin is dry and wrinkled when the potato has been cooked all the way through. I have a method for baking potatoes which eliminates both these concerns.

The oven should first of all be put on to preheat to 400F/200C/Gas Mark 6. The potato should then be washed and dried. Prick the potato a few times with a fork. A long metal skewer should then be carefully inserted through the centre of the potato lengthwise (as shown) and the potato loosely wrapped and sealed in aluminium foil. Place the foil package on a baking tray and in to the oven for one hour and fifteen minutes. Essentially, the heat will be conducted along the metal skewer and in to the centre of the potato, ensuring even cooking.

When the potato is in the oven, it is time to prepare the filling. Simply mix the soured cream, garlic, basil and one of the pineapple rings (finely chopped) together in a small bowl. Cover with clingfilm and refrigerate until required.

When the baked potato is done, remove the tray from the oven with protective gloves and (still wearing the gloves!) gently squeeze and massage the potato to fluff up the centre. Sit it back on the tray, still wrapped in the foil, and set it aside while you grill your gammon steak.

The fat or rind should be left on the steak while you cook it but can be removed later. Grill under a medium to hot grill for about seven to eight minutes. Ensure the steak is fully cooked then serve as shown in the photograph at the top of this article.
Posted by Gordon Hamilton at 03:35 0 comments

What does the meal described as, "Steak, Egg and Chips," conjure up in your mind? Does it cast up images of a greasy fried egg, a cremated steak and chips (french fries) fried in saturated animal fat? I am sure it will for many but this is a healthy steak, egg and chips recipe and below I have described how to make it in detail.

Put the oven on to preheat to 400F/200C/Gas Mark 6 with a large baking sheet inside. Slice and then chop the potato in to chips (large french fries.) Put the tablespoon of sunflower oil in to a large bowl and season with salt. Add the chips and stir them around carefully to ensure even coating. Place the chips on to the hot baking sheet and in to the oven for thirty minutes, taking the tray out and giving it a gentle shake around every ten minutes.

When the chips have been on for around twenty minutes, put a large pan of water on to boil for poaching the egg. Add a little sunflower oil to a non-stick frying pan and bring it up to a high heat. Fry the steak for a minute or two each side (depending upon thickness and preference) at the highest heat possible before removing the pan from the heat and setting it aside for the steak to rest.

Break the egg in to a small cup or bowl, careful not to damage the yolk. Add the white wine vinegar to the boiling water and stir reasonably quickly to create a whirlpool effect. Stop stirring and quickly deposit the egg in the centre of the whirlpool. Reduce the heat until the water is gently simmering and poach for three or four minutes.

Add the olive oil to a small non-stick saucepan. Bring up to a medium heat and add the garlic, then after about thirty seconds the mushrooms, stirring constantly with a wooden spoon. Cook for two minutes.

Remove the chips from the oven and put them on to a plate, followed by the rested steak. Remove the poached egg from the liquid with a slotted spoon and allow to dry well before sitting it atop the steak. Add the garlic mushrooms to the plate, garnish the egg with the fresh herb and serve.
Posted by Gordon Hamilton at 04:09 0 comments 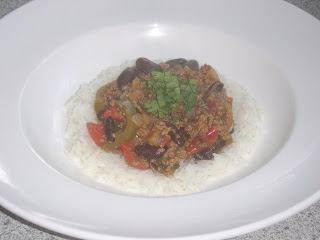 Beef Chilli is of course a very popular dish but so often there are a great many unnecessary and unhealthy ingredients incorporated within it. This version eliminates those ingredients but still produces a delicious and healthy meal to be enjoyed by all the family.

4oz basmati rice for serving upon

In a large, dry pot, brown the beef, stirring well with a wooden spoon to ensure even cooking. Wash the red kidney beans thoroughly in a colander under running water before adding all the remaining ingredients - bar the coriander/cilantro and the rice - to the pot. Bring up to a gentle simmer and allow to cook in this way for about forty-five minutes.

The rice should be timed to be ready with the chilli and cooked dependant upon the instructions on the packet. The chopped coriander/cilantro should be stirred through the chilli immediately prior to serving with the little left over used as a garnish.
Posted by Gordon Hamilton at 05:55 0 comments