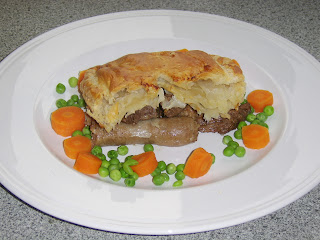 Steak and Sausage Pie - or simply Steak Pie as it is more commonly known - is a very popular dish in Scotland. Particularly at New Year, but by no means exclusively so, Steak Pie forms a very prominent part of the traditional food of Scotland. It is most often made at home but those looking to buy Steak Pie from their butcher's shop on New Year's Eve - or Hogmany - are likely to have to place an order in advance if they wish to avoid disappointment.

Steak and Sausage Pie is an extremely easy dish to make. Very often, when making a pie such as this, I will substitute half the quantity of stock for cheap red wine, which gives an extra lush appearance to the gravy and flavour to the dish. This is optional, of course, and I have not used the red wine in the instance where I took the photograph pictured right.

The quantities below will make a steak pie which will provide a hearty meal for two people with accompaniments of choice.

Add the steak to a large pot or pan and brown - or seal - it over a high heat, stirring constantly with a wooden spoon. This is to seal as many of the juices in to the meat as possible.

Once the steak is fully sealed, add the beef stock, bring to a boil, then turn the heat down and let it simmer gently for half an hour.

After half an hour, add the sausages to the pot and put your oven on to preheat to 400F/200C/Gas Mark 6.

Carefully roll out your pastry to a size where it will just be enough to cover a rectangular pie dish, about 9" by 5" by 2".

Put the steak and sausage in to the pie dish with enough stock to almost cover them. Put the pastry carefully on top and press down around the edges to seal. Do not forget to make a "+" shaped cross in the centre of the pie, each arm of which should be about 1" long, in order to allow the steam to escape during cooking.

It is common to use beaten egg to glaze the pie prior to putting it in to the oven but I simply use milk. Ensure that you do not use too much glaze or you will make the pastry soggy and cause it to collapse and/or tear.

Place your pie in to the oven and cook for half an hour, until the pastry has risen and turned a beautiful shade of golden brown. Serve with vegetables of your choice.
Posted by Gordon Hamilton at 03:34